Posted at 12:40h in NEWS by Nestler Stefanie
Share

The Centre for Euro-Atlantic Integration and Democracy (CEID) organized its third European Café in Szeged on the 2nd of March. The title of the discussion was “Buffer Zone: Russian Propaganda in Central-Europe” with the participation of: András György Deák, Senior Fellow at the Institute of World Economy of the Hungarian National Academy of Sciences and András Dezső, journalist at the influential Hungarian news site Index. The discussion was held in Hungarian.

Few would deny that we are living in a post-truth society where the public is flooded with information from insecure and uncontrolled sources. Social media offers few filters, falsified or just not thoroughly documented stories can easily mislead people. There is obviously a difference between a calculated attack when a falsified or simply false information is spread or when the story is partially true, but the conclusions drawn are exaggerated or misleading. There are several examples for both: in 2014, a Russian-friendly Hungarian website published photos of Hungarian T-72 armoured vehicles as being sold to the Ukraine. The story created diplomatic waves, the Russian Foreign Ministry protested – but finally it turned out that the T-72s had been transported inside Hungary, having nothing to do with the Ukraine. It was a completely fabricated story that appeared real. Another similar case was the famous Lisa-incident in Berlin, when a 13-year-old German-Russian girl did not go home after school. Her first story was based on the allegation, that she had been kidnapped and raped by Arab-looking young men. Happening in the climax of the refugee crisis, it immediately led to demonstrations in Berlin, and ended up being an issue at the negotiations of the German and the Russian Foreign Minister. The Lisa-story was manipulated well, in order to reveal how insecure Germany had become due to the influx of asylum seekers. But Lisa’s story was false – she spent the night at a friend’s house, and did not want to confess it to her parents. By the time the German authorities cleared the case, the international media was full of stories about the rising insecurity in Germany (due to migration).

One question raised during the discussion dealt with the origins of Russian propaganda or the intention of influencing the public opinion abroad. Mr. Deák pointed out that – although the roots can be traced back to Soviet times, where similar methods had been used – the present-day Russian propaganda started with Vladimir Putin who actually set up a special department in the Kreml for this purpose. It became stronger during the Ukraine war, when – for example – Russian trolls falsified the Wikipedia site of the Mig-29 fighters, in order to prove that it was possible that the Ukrainians shot down the Malaysian plane. In this case, Russia tried to spread at least four different narratives which created a complete insecurity about the causes. None of the narratives were true, they just served the purpose of disorienting the Western public and shaking the confidence in Western media and in the results of the investigation team.

Another question dealt with the people who create the propaganda: some are paid for it, some just do it out of conviction. The involvement of the Russian secret service is proven in many cases too. A typical problem is, however, that the authorities responsible for countering these intentions are either incompetent or unprepared, and in the worst case, governing parties intentionally ignore the problem. In Hungary for example, there has not been a single case of expelling Russian agents in the last 8 years – whereas in almost all the neighbouring countries such cases occured.

These circumstances make the life and the work of journalists rather difficult. You always have to doublecheck your facts, prove your sources thoroughly and if you have only one percent doubt, you better do not publish it, said András Dezső. He recalled a story he had researched for months with a colleague, and although all the circumstantial evidences pointed to a real spy story, there was no hard evidence.

Reacting to the questions to the audience, our speakers concluded: Russian influence will probably increase in the future, while Moscow considers itself mistreated by Europe and surrounded by “enemy countries”. There will be intentions to exert influence in both the political and the economic sector, especially in the Balkans, which is still considered a Russian sphere of interest. 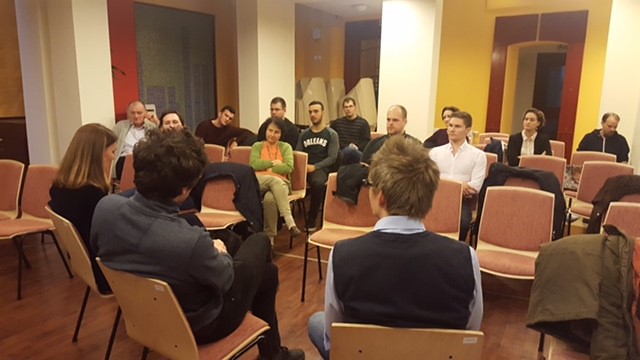 The event took place in the framework of the European Café.