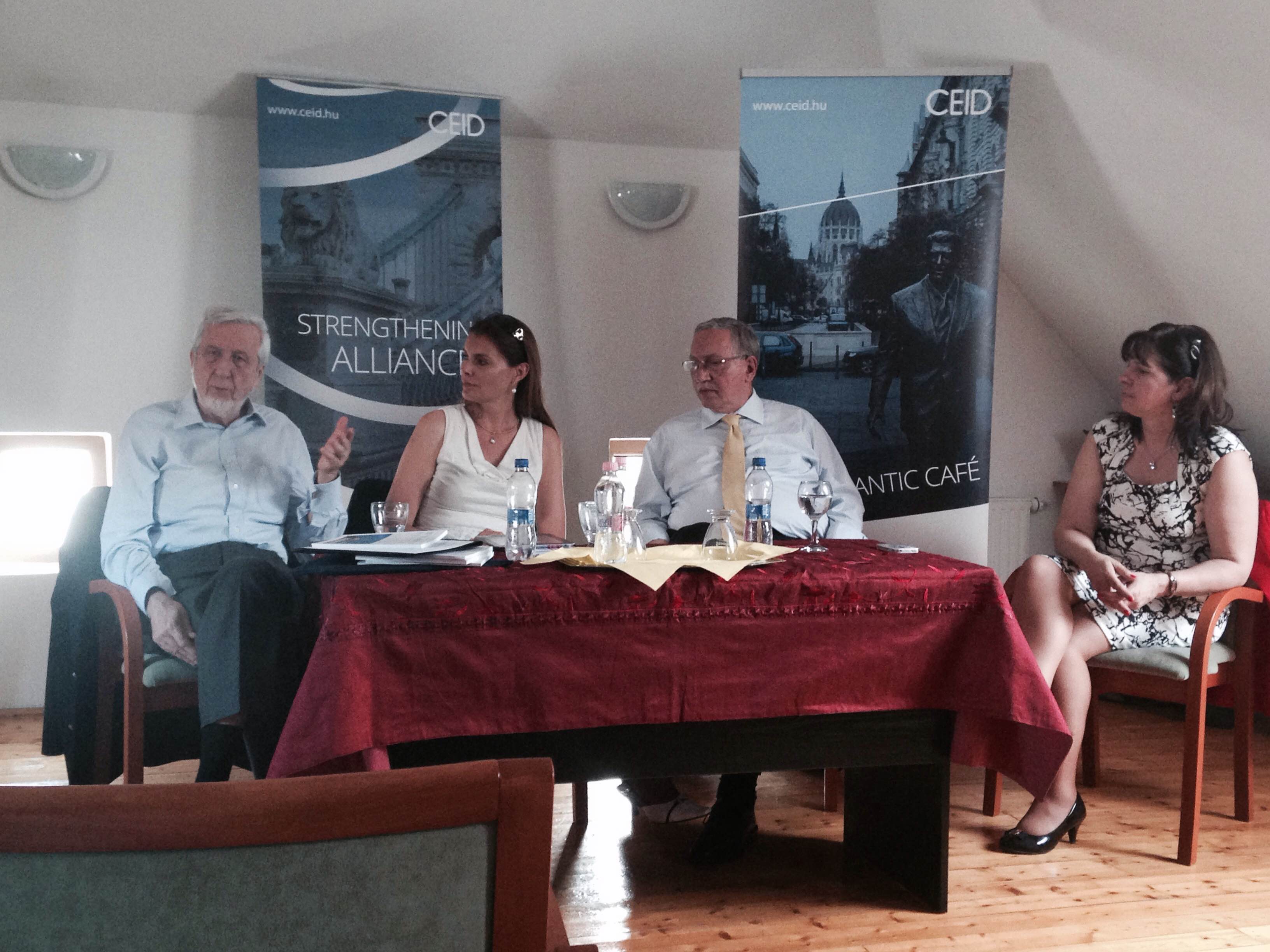 22 máj Euro-Atlantic Café Eger: It all started with the Gripens

Posted at 10:21h in NEWS, NEWS RIGHT by daniel.bartha
Share

CEID celebrated its second Euro-Atlantic Café in Eger, by invitation of the Agria Universitas Foundation of the Eszterházy Károly College. Our outstanding guests were Mr. Géza Jeszenszky, former foreign minister and two-times ambassador of Hungary (to Washington and to Oslo) and Mr. András Dékány, former ambassador to the UN in Geneva, himself an expert on US affairs.

Former foreign minister Jeszenszky pointed out in the beginning of our conversation that it would be a mistake to write the US off, Washington will remain the leading power of the world for quite a while. “With all its mistakes, the US is still the country of good will and great opportunities, therefore it is in Hungary’s interest to maintain good relations with Washington” – stressed the former diplomat. As a history professor, he reminded the audience that Hungary used to be the pioneer of transatlantic relations from the CEE region, and the first democratic government of József Antall and the first cabinet of Viktor Orbán from 1998 were both Atlanticists in their foreign orientation. However, the government’s decision in 2001 to buy Gripen fighter jets instead of F-16 caused the first serious misunderstanding in the bilateral relationship. But it was far from being fatal: President George W. Bush visited Hungary in 2006. This was the last presidential visit to Hungary.

Ambassador Dékány added that it was most probably not the financial loss or the lost business opportunity which caused the uproar in Washington but the lack of coordination and information. “One can do a lot but you have to communicate and explain it well”- argued the former Washington-based diplomat, who believes that perception can play a fundamental role in politics.

Former Foreign Minister János Martonyi had pointed out in the first Euro-Atlantic Café, that the US administration seemed to have some reservation towards the center-right governments of Hungary ever since the transition. Mr Jeszenszky did not dismiss this perception, agreeing that the media usually tended to support the leftist forces, but stressed that he had never felt discriminated and could always rely on very good personal relationships – which are more important in diplomacy than the media reports.

As for the future of the Hungarian-US relations, András Dékány argued that Hungary can be a good ally to the US when it is a good and reliable partner in the EU. Barack Obama and his administration tries to shift some burdens to Europe and therefore Washington needs a strong EU. Anybody who weakens the European construction can threaten US interests. He agreed that gestures can help improve the bilateral relations, one of those steps being the decision that the Hungarian government is willing to send troops to Iraq in the fight against ISIS. “This is a positive step, but it is far from enough to rebuild the relationship. It is our prime interest to avoid that US-Hungarian relationship became hostage to Hungarian domestic politics”.

It is also vital that Hungary increases its defense budget. The expectations are at least 2 % of the GDP, yet Hungary barely reaches 1%. Mr. Jeszenszky pointed out that it is not only NATO obligation but our vital national interest to improve our defense capability, since terrorists might attack countries where the defense level is low. He demanded an open and honest discussion about the US phone tapping methods, saying that whether we like it or not, the US agencies (NSA and the others) can in fact save lives in Europe with the information gathered.

The two new ambassadors, Ms. Colleen Bell and Ms. Réka Szemerkényi can open a new chapter in the bilateral relations, however, one can be a very charming and a highly professional diplomat, it is still extremely difficult to sell Vladimir Putin’s visit to Hungary – said the former foreign minister.

As for the conflict in the Ukraine, it is simply untrue that the US had generated the tension. It is absolutely unacceptable to annex territories as Putin did with the Crimea. Without the present crisis neither Europe nor the US would have even thought about bringing Ukraine closer to the NATO. At this stage, however, there are very few options other than the economic sanctions – argued Mr. Jeszenszky.

As Ambassador Dékány formulated, the US would like to get rid of the troubles in Europe but it is unable to do so: what Vladimir Putin has done is simply unacceptable, one cannot just trample over the principles and legal frameworks of the post-Cold War World. Mr. Dékány anticipates that Europe and the US will continue to work close even in the future, because the situation (in the Ukraine) will remain tense for quite some time.

As for the spreading of Anti-Americanism and the slogans of the far right part Jobbik, both speakers stressed that this party does not serve the interests of the Hungarian nation and complained about the low level of information and knowledge of the general public about foreign affairs. Their conclusion was that lack of information is the prime reason why the politicians of the extreme right can totally misguide many voters.

Disclaimer: The views and opinions expressed in this article are those of the publisher and do not necessarily reflect those of the donor.

In 2015 the Centre for Euro-Atlantic Integration and Democracy (CEID) is organizing a series of discussions on transatlantic issues in the framework of our new project Euro-Atlantic Café. The project is supported by the Embassy of the United States to Hungary. Our goal is to bridge the gap between the US and the Hungarian interpretations and perceptions of current events.We invite US speakers on selected topics to debate with Hungarian counterparts in regular intervals.