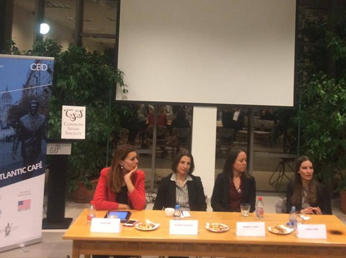 Posted at 11:08h in NEWS, NEWS LEFT by admin
Share

The Centre for Euro-Atlantic Integration (CEID) in cooperation with the Common Sense Society (CSS) with the support of the American Embassy in Budapest and Pallasz Athéné Geopolitical Foundation (PAGEO) has organised the 11th event of its Euro-Atlantic Café series. The discussion took plce on 3rd November, 2016 in Eger.

Please find a brief summary below.

Clinton or Trump: A critical election? – was the question discussed in the first Euro-Atlantic Café of the 2016-2017 season. The panelists of the event were Júlia Lakatos (Méltányosság Politikaelemző Központ), Anita Kőműves (Népszabadság) and Szelényi Zsuzsanna (politician and foreign policy expert), moderated by Edit Inotai Senior Fellow at CEID.

The first thing all panelists pointed out was the fact, that the 2016 presidential campaign is more of a ‘soap opera’ than any previous ones. Ms. Szelényi added that the most important question is that who do the voters believe in, minimizing the importance of rationality and highlighting the complete lack of policy debates. Lakatos added how the classical call-words aren’t working anymore. Despite the fact that Clinton has a well written 200 page-long policy program, it’s barely mentioned in the news reports.

According to Lakatos, the GOP failed to synthesize the feedback received from the voters, something that would have been especially important after the lost elections of the previous years. Donald Trump however, was successful in delivering his message to this rather disillusioned fragment of the American society, argued Kőműves. The crisis of the Republican Party is not a new phenomenon reminded Szelényi. The message of Donald Trump is successful because of the uncertainty after the 2008 financial crisis. The American society reacted adaptively but also faced a type uncertainty for the first time in decades, allowing the populist messages of the Republican candidate to be even more effective.

Ms. Kőmüves emphasized throughout the conversation the importance of Hillary Clinton being the first female candidate, thus a role model for women and the opportunity to make history in this sense.

On the issue of Hungarian-American relations the experts agreed that the US’s foreign policy is rarely affected by the change of administrations on the long run. The short term goals and dynamics might differ but the big picture remains unchanged in the bilateral relation of the two countries.