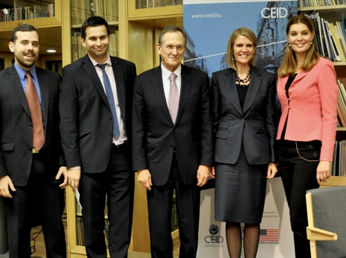 Posted at 12:35h in NEWS, NEWS LEFT by admin
Share

The Centre for Euro-Atlantic Integration and Democracy (CEID) in cooperation with the Common Sense Society (CSS) has launched the second series of its Euro-Atlantic Cafés on transatlantic relations, supported by the US Embassy in Budapest.

Facing the results of the recent presidential election in the United States, we may easily conclude that a new America is emerging in front of our eyes. Ms. Colleen Bell emphasized that the election, and the victory of president-elect Donald Trump really came down to personalities and clearly displayed the will of American people.

According to Mr. György Szapáry, Donald Trump’s success was mostly due to him being able to understand and find the way to address the working population – mainly the white working class. In his communication during the campaign, the new President-elect was operating with a language which was previously unprecedented in politics. His speeches and vocabulary reminded to the style used mostly in social media, which had remarkable effects on the American elections.

Concerning the polarization of societies across the world and specifically in the United States, Colleen Bell tried to point out that there was a wide range of values and aspects present in the American society and she promoted the unity of the American people.

Both panelists agreed that the new President and the administration will have a huge amount of hard work ahead to reunite the society. Mr. György Szapáry highlighted the effects of the social media, which stirred up emotions, making the society look more polarized than it actually was.

Considering the underlining problems and economic hardships, Ambassador Bell repeated the importance of the common values which would bring American people together again. However, there obviously were economic reasons and aspects behind the results of this election, like the shrinking of the middle class, the increasing income and wealth differences, the level of poverty and the masses who are left behind. It will be necessary to address and re-evaluate these issues in the future.

Mr. György Szapáry added that the repercussions of the financial crisis are still clearly visible. He also pointed out that Hillary Clinton had less support among the minorities and even white women had not voted for her as much as it had been expected. The dividing line between the Democratic urban and Republican rural regions deepened considerably in the previous years.

About the agenda of the forthcoming administration, both panelists agreed that there were going to be inevitable changes in domestic policy, such as tax cuts and massive investment in the infrastructure. However, as Mr. Szapáry sees it, the most important question regarding the economy is going to be trade, namely the future of NAFTA, the free-trade agreement with Mexico.

As for American foreign policy, sudden and sharp shifts are historically unusual. As a global power, the United States has its own interests, that Washington will continue to pursue, regardless of the color of the administration and the President. According to Mr. György Szapáry, no matter what most people say, America has responsibilities, but also competitors for influence, therefore it is unlikely for the country to take an isolationist path. Foreign policy agenda towards Russia is also improbable to change. Colleen Bell also stated that the American-Russian relationship was principled, and the sanctions that were put in place after the annexation of Crimea proved to be successful to influence Russia. She also said that the next President has to continue to have constructive talks with the allies, mainly the European Union and NATO. The United States needs a unified, strong and safe European Union, and as Mr. György Szapáry pointed out it was likely that Trump would try to reach out to Europe to secure these interests.

In the fields of bilateral relations between the United States and Hungary, U.S. Ambassador Bell stated that it was strong, robust and dynamic on many levels, including law enforcement, security, high-level engagement, cultural and educational exchanges. Hungary is an important ally for the U.S., as a member of NATO, the EU, OECD and now the Human Rights Council. She also highlighted that the main American foreign policy goal was the promoting of democratic values, which was definitely going to continue.

Mr. Szapáry agreed that Hungary’s importance as a NATO ally and a neighbor to the Balkan region was unquestionable, however, a lot would depend on the future Secretary of State and the President’s assistants regarding the foreign policy towards Hungary.

Considering the lessons of this election for both political sides, Amb. Colleen Bell sees it as an opportunity to reevaluate what America as a country stands for, and sees it important for the Democrats to put effort into promoting the legacy of President Obama. Mr. György Szapáry added that the democratic side had to reassess and try to better understand what was going on in the society, and politicians as a whole should try to reach compromises in the future.

During the Q & A part of the discussion, emphasis was put on the issues of frustration if the new President would not be able to deliver his promises to the voters, the power of the President in the American democracy, the need for communication between the Republican and Democratic sides, the future of the American alliances and the relationship with Russia.