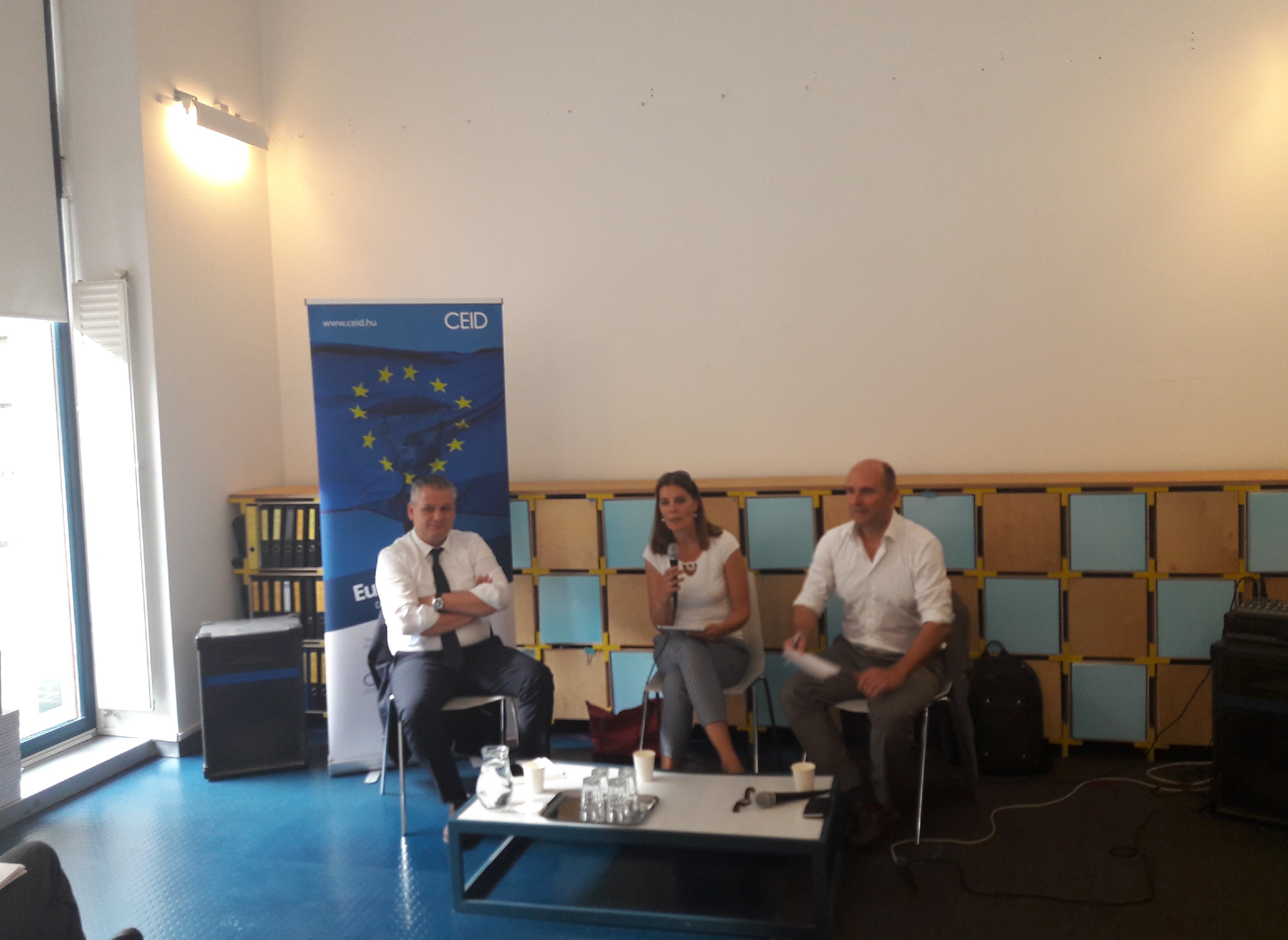 On June 13, 2018, CEID organized an event of the Euro-Atlantic series with the title: Fight for your Money: Winner and Losers of the next EU Budget. Panelists of the event were Mr. Roland Freudenstein, Deputy Director and Head of Research at Wilfried Martens Centre for European Studies (Brussels) and Mr. Szabolcs Takács, State Secretary for the EU Affairs, Office of the Prime Minister of Hungary. Ms. Edit Inotai, a Senior fellow of CEID, moderated the event. The discussion dealt with the recently released overall figures and the basic structure for the 2021-2027 Multiannual Financial Framework (MFF). The panelists addressed the following fundamental questions: will political or economic considerations prevail during the negotiations, how will the discussions be influenced by the political and economic crises of the South and the divisions created by migration, and what does the potential solidarity clause mean for Central Europe?

The discussion began with Ms. Inotai asking for initial reactions regarding the release of the MFF basic structure. Mr. Takács started by pointing out the discrepancies between certain countries perspectives on expanding the budget. He depicted the views of countries such as Denmark, Netherlands and Austria who believe it is not necessary to fill the gap left by Brexit. Meanwhile, Mr. Takács pointed out that other countries have different priorities for spending EU funds. One of these priorities is security, which has a very different connotation to a country like Estonia or Poland than Hungary. Both panelists did agree that this is a process of negotiation with parties starting from separate points but in the end finding an area of compromise.

One of the more debated and controversial elements of the released proposal was the suggested cuts to the Common Agricultural Fund. Even if the budget cuts part of these subsidies, they will remain a significant percentage of the MFF, and Ms. Inotai asked if this is the most efficient use of resources given the relatively low amount of money spent on other areas such as digital innovation. Mr. Takács enthusiastically emphasized the value of agriculture in Europe and the role subsidies play ensuring access to healthy, sustainable food. Furthermore, he stressed the initiatives individual governments are taking to incentivize digital innovation but suggested that cohesion funds could be used to help certain member states to remain competitive.

The conversation then turned to the question of cohesion funds and the benefits seen by both recipients and net payers. Mr. Freudenstein began by commenting on the plummeting German public support for increased contributions due to the belief that only recipients benefit from the payments. He commended leaders of net payer countries who stress that the money does, in fact, make its way back to the country of origin and emphasized that other leaders should highlight these benefits. Meanwhile, Mr. Takács remarked that cohesion funds remain a legal obligation enshrined by the EU ascension treaty codifying the EU responsibility to support the poorer member states so they can be competitive and integrate into the single market. Furthermore, the cohesion funds should continue to be allocated on a purely GDP basis to ensure that these states receive the necessary support to remain competitive. He agreed with Mr. Freudenstein that net payers do receive their investment back from the cohesion funds spent in other countries, but it should not be at the expensive of local economies.

The discussion naturally traversed to the contentious topic of inserting a solidarity clause for cohesion funds into the MFF, and if this is a move by the European Commission to politicize and attack certain countries. Mr. Takács began by stating that this clause was an attempt to single out and attack certain countries for legitimate policies opposed by the Commission. He stressed that this was against the fundamental reasoning behind cohesion funds, which should be solely allocated based on GDP. He pointed out that Hungary met all legal requirements during ascension and that cohesion funds are not charity but essential in ensuring Hungary’s ability to remain competitive and further integrate into the single market. Mr. Freudenstein took a different approach and used his previous argument linking cohesion funds to the progress of the European project. Because of this, countries without an independent judicial body should not receive funds.  Only nations with verified, independent agencies have the right to cohesion funds regardless if they already passed scrutiny during EU ascension. If there are questions about the legitimacy of these bodies, then the funds should be withheld regardless of the country until it is verified that the money is used as promised. He also noted that the clause did not mention specific countries by name. Furthermore, he dispelled the notion that was an attempt by the European Commission to exert its influence over particular nations since the European Council, made up of EU state leaders, has final say over the clause.

The moderator then moved the discussion towards the question if cleavages exist between East-West and East-South, and, if they do exist, how will it influence the negotiations? Mr. Takács argued that Brussels overplays these divisions and uses them as a tool to further divide countries receiving cohesion funds. However, Mr. Freudensteinn stated that there are indeed divisions between net payers, old recipients and new recipients. He acknowledged that there is significant and difficult work ahead to reconcile these differences, but he also stressed that this was why the negotiations are so encompassing. Nations want the best for their citizens and will advocate for their interests, but in the end, there must be a compromise somewhere in the middle.

The moderator wrapped up the discussion by asking both participants what the timeline for a comprehensive MFF will be and who will be the winners and losers. Both participants agreed that these would be drawn out negotiations further complicated by the 2019 European elections. Mr. Freudenstein summed up the idea of negotiations by stating that an ideal end of the talks would see everyone equally unhappy and only then would all parties be ‘winners.’