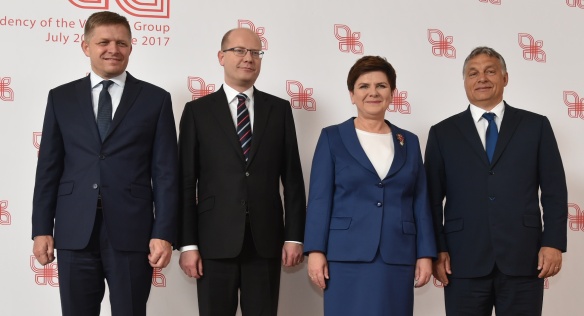 22 aug Future of V4 inextricably linked to the refugee crisis

Posted at 09:38h in NEWS, NEWS LEFT by admin
Share

“The quota issue has become the ruling populist domestic political issue for all governing parties in our region, and a common solution to this crisis has united these governments. Instead of separating the more moderate [Visegrad] countries from the  [more aggressive bunch], western [EU] member states threw gas on the fire when they tried to apply pressure by threatening to suspend EU funding, create a two-tiered EU, or suspend European Council voting rights.”

In recent weeks and months, the Visegrad cooperation has become the flagship of Hungarian foreign policy. This process started 2-3 years ago. The suppression of the Atlanticist political leanings, bilateral disputes with several of our neighbors, and an aggressive stance towards Brussels has quarantined Hungarian diplomacy, but it has nonetheless been able to prop itself up on the power of its Visegrad cooperation.

The government is not exaggerating when it says this is a real power. The V4, as a regional platform, has been significantly effective in keeping certain issues on the agenda within the EU or with other third parties without actually diminishing bilateral relations. It has been standard practice in recent years for the prime ministers of Visegrad 4 countries to hold summits and develop shared positions on the eve of important European Council summits. The same can be said for standing council meetings, where the ambassadors of V4 countries regularly develop shared positions with respect to key issues. This is not only important from a lobbying or symbolic perspective. Based on voting proportions, it is clear that Central European countries are much stronger together than, say, France alone. This alone has done much to boost the reputation of the V4 compared to other regional platforms whose significance has withered in recent years.

But there is another side to this cooperation that is often not spoken of.

Many see the power of the V4 as coming from the fact that the cooperation never institutionalized — there is no fixed structure beyond the Visegrad Fund. Agenda items are organized annually by the rotating presidency who also can intertwine these with issues with their own domestic issues, thereby creating a situation – if there is sufficient political will and energy – for national issues to become regional policies. On the member state level, coordination is entrusted to the respective foreign ministries, and the minutia of carrying out these policies are left to V4 officers within the appropropriate ministries. This, however, also presents serious obstacles due to the fact that governmental structures and the internal structures of ministries vary significantly from one member state to the next. In some cases, this results in an issue that would be handled by one ministry in one country being handled by two or three ministries in another.

For more than a decade, the V4’s program has been guided by the principle that all potential sources of conflict should be swept under the rug lest they hinder successful cooperation in other areas. Beyond this, there is a golden rule of proportionality that supersedes the aforementioned points: cooperation is only possible in those areas in which Poland is a willing participant. Without Poland, all efforts for common policies are insignificant, and any initiative that Warsaw is lukewarm towards is destined for failure.

This is also the reason for the uptick in V4 cooperation over the past year. As Warsaw’s anti-Berlin rhetoric, as Brussels launched its “rule of law mechanism” against Poland, and as Polish diplomacy was placed under quarantine, so too did the Polish government put an emphasis making regional policy the centerpiece of its politics. Initially, they tried to achieve this by reviving the notion of the “intermarium” —  an attempt to reignite the Polish public’s memory of the geopolitical notion of a Mitteleuropa. But President Andrzej Duda’s efforts to popularize this geopolitical model has largely been abandoned by Poland after less than a year, but the fundamental tenets of this model are likely to remain over the long term.

In this respect, and over the longterm, Poland would like to decide its own relations to Brussels, Berlin and Moscow, as part of an effort to lead a regional block in which the V4, the Baltic states, Romania, and perhaps Bulgaria, could play an important role. The goal here is to unite these countries primarily on their common NATO cooperation, but also as a EU cohesion policy interest group.

The V4, therefore, is the centerpiece of the Polish foreign policy. Furthermore, starting on July 1st, Warsaw will have assumed its one-year presidency of the group, thereby giving even more weight to the region within Warsaw’s own foreign policy. While Polish leadership is a condition to the success of the V4, it is certainly not the only condition.

In order for the cooperation to be successful, there is a need for outside support. Currently, this has been supplied by the migration crisis, but also by western Europe’s inability to identify psychologically with this problem. The quota issue has become the ruling populist domestic political issue for all governing parties in our region, and a common solution to this crisis has united these governments. Instead of separating the more moderate [Visegrad] countries from the [the more aggressive bunch], western [EU] member states threw gas on the fire when they tried to apply pressure by threatening to suspend EU funding, create a two-tiered EU, or suspend European Council voting rights. It did not matter that Robert Fico lost the elections with his anti-immigration campaign, elevating the Slovakian extreme right into parliament, any acceptance of a compulsory quota would be tantamount to political suicide. A similar situation developed in the Czech Republic, where the internal conflict within the governing coalition retarded a quick political transition, but this does not mean that it will not happen.

An easing of the migration crisis could also put an end to the blossoming of the V4. It is not easy for the Slovakians and Czechs to sit comfortably in the same club as the Hungarians and Poles. Beyond that, their European group, the European Socialist Party, has expressed strong criticism of them, and the anti-Berlin sentiments expressed by their politicians is destructive both politically and economically. Prague noticeably stepped out of the confines of V4 solidarity when, despite being called on by Warsaw and Bratislava, it did not raise its voice against German-Russian plans for a Nord Stream 2 pipeline. The Sobotka government is clearly uncomfortable because the country’s economic and political elite maintains a strong dependence on Germany which is also applying pressure.

The Czech Republic’s presidency (which ended on July 1st) put shackles on the hands of Prague, and it is clear now that the Czech participation in the V4 will significantly dwindle in the coming months. Analysts also see the V4 as an uncomfortable topic for Slovakia as well. Similar to the Czech Republic, Slovakia’s own [V4] participation is also conflicted. The country’s foreign service, including foreign minister Miroslav Lajčák, is much more reserved in its criticisms of Brussels and Berlin. The introduction of the Euro has been a success story for the Slovakian people, and many consider the country’s participation in the V4 a threat foreshadowing an impending nightmare situation where the country becomes a second-class EU member state. The Slovakian government is obviously trying to use its rotating EU presidency to muffle contradictions between the region and the West, and to decrease the regional influence of the Poles who have just received the V4 rotating presidency. Citing its responsibilities toward the rotating EU presidency, Slovakia’s lack of participation in the V4 has slowed the progress on a number of V4 initiatives, and the Fico government is obviously employing a strategy of double talk towards the region and the West.

In this European situation it is logical for Hungary and Poland to propose the enlargement of the V4. But such ideas are not alien to the V4. Over the past 10 years, almost 20 initiatives within the V4 have been launched to expand the V4 through various constructs with Romania, Croatia, Austria, and Slovenia. Some of these initiatives concerned common infrastructure development programs, while others concerning closer cooperation between interior ministries, or achieving shared goals in foreign policy.

Viktor Orbán is right when he says that the V4 could not realistically be enlarged to a V5 or V6. This would upset the internal balance of power, the informal operation and established priorities. It is also because the individual members have such significantly diverging interests.

Vienna has not been open to further deepening its ties to the V4. In fact, with the exception of closely cooperating with the interior ministries of the V4, Vienna has obviously kept the V4 at an arm’s length.

Austria is an EU member state and a significant net contributor to the EU budget. It is an independent state outside of NATO and deals with a different array of issues concerning the economy, social issues, education, minorities, and even infrastructure development.

For historical reasons, Austria can only see itself in a leadership position, and it will never see Eastern Europe as an alternative to its relationship with Germany. Earlier, the Czech Republic tried to ring in Austria with the Slavkov trilateral cooperation (involving the Czech Republic, Austria and Slovakia), but this obvious failure is a signal for future attempts with Vienna.

In light of all this, it important to properly assess Viktor Orbán’s vision for the future of the V4 and a closer cooperation with Austria. Both will only last as long as the migratory pressure continues along the Balkan route. Of course, based on the experiences of the past two years, this could also mean a bright future for both.

This article was originally published by Figyelő on 11th August, 2016, and translated into english by The Budapest Sentinel on 16th August, 2016.