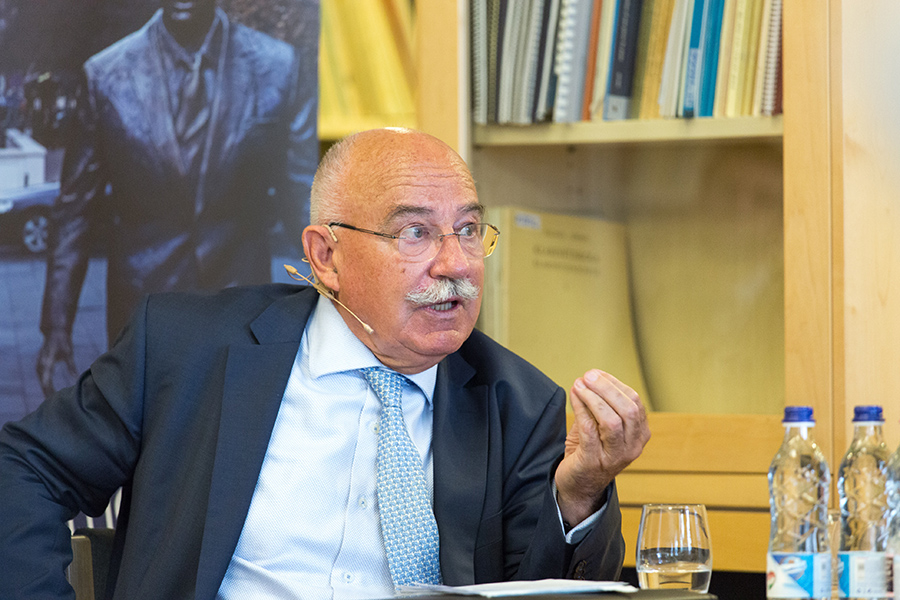 “Ambassador Ms. Colleen Bell could actually consider herself lucky for being accredited to Budapest at a time when political tension between the US and Hungary reached its climax. From this point on things cannot possibly get worse” – former Hungarian Foreign Minister Mr János Martonyi pointed out somewhat sarcastically at the first Euro-Atlantic Café. Despite such a sarcastic reference to the political scandal originating in the travel bans imposed by the US against Hungarian politicians, both the former foreign minister and Professor John Shattuck, Rector and President of CEU agreed that the strategic alliance between the US and Hungary has remained intact. As an experienced diplomat and former member of the State Department, Mr. Shattuck expressed his views that Washington had no intention to provoke Hungary. Although Mr. Martonyi hinted at the deep-rooted frustration of the Hungarian conservative political forces for being misunderstood since the beginning of the 1990s, he also stressed that instead of trying to decipher the highly complex background of the current confrontation, we should make more efforts to understand each other and suggested that the US administration should also diversify its sources of information.

TTIP: What are we afraid of?

When asked about specific policy areas where the two countries could best cooperate, Mr. Martonyi drew attention to the crucial importance of the enlargement process and the the creation of a unified Europe, where the US could also play an important role. On the other hand, Prof. Shattuck underlined the significance of the strong security link represented by NATO, and the importance of the Transatlantic Trade and Investment Partnership. TTIP, even though generating massive controversy, should be viewed as a opportunity to create the largest trading block in the world. Regarding TTIP, Mr. Martonyi explained that reliable statistical data simply proves the opponents of the free trade agreement wrong by showing that the EU exports way more products to the US than the other way around, a figure that in case of Hungary means twice as much export than import. “After all, what are we afraid of?”- asked the former Foreign Minister referring to the growing concerns of European – including Hungarian – citizens.

US presence in Europe

Although both panelists shared the view that US foreign policy towards Europe should be observed in light of the United States’ changing role as a global player, there were slight differences in their interpretations of the causes and implications of such a significant geopolitical shift. On the one hand, Mr. Martonyi approached the issue from an institutionalist perspective, pointing out the inadequacy of political institutions and the political gridlock embedded in the Constitution. Mr. Shattuck, on the other hand, attributes the significant loss of American “soft power” to the mistakes committed by the US administration in recent years, spearheaded by the highly controversial war on terror. As to the malfunction of democratic institutions, he pointed to the fact that it is rather a global phenomenon than a unique trait of the American society. He further explained that US foreign policy towards Europe is in his view based on two main pillars: the Transatlantic tradition and the recent attempt of the Obama administration to lead his country into a multipolar world. The latter is a highly contentious policy goal that has far-reaching consequences for Europe and that has been severely contested at home. At this point of the argument, Mr. Martonyi referred to the fact that the US can be equally criticized for staying out of a conflict as for getting involved in it, which constitutes the inherent paradox of US foreign policy.

The crisis in Ukraine

In discussing the potential strategies regarding the Ukrainian conflict, there was strong consensus on ruling out military solutions and instead promoting negotiations. While at times diplomacy appears to be feeble as opposed to the use of force, Mr. Shattuck reminded that the West has a considerable bargaining power backed by economic sanctions and NATO. He also implied that a possible – and very much disputed – scenario could be the “Crimea for peace” deal that would bring peace to the Eastern parts of Ukraine in exchange for some sort of an international recognition of the Russian annexation of Crimea. The situation in Eastern Ukraine is a much more complicated one, primarily due to the opacity of Russia’s ultimate purpose with this region. According to Mr. Martonyi there are two approaches towards the crisis: a realist and an idealist one. He considers himself a devoted idealist, who believes that such flagrant violations of international legal norms cannot be tolerated, although he also rejects the option of a military operation. As to the role of Hungary, he found the international condemnation of Hungary exaggerated and cherished the successful efforts of the Visegrad countries to preserve the unity of the V4.

Mr. Shattuck did not try to conceal his admiration for Obama, attributing a “very large legacy” to him. While the ending of the isolation of Cuba and altering the dynamic of negotiations with Iran are the most detectable achievements of the Obama administration, he considers the shift from the hegemonic attitude towards multilateralism the most remarkable development in contemporary US foreign policy. Mr. Martonyi basically agreed with this point, complementing it with the appraisal of the outstanding performance of State Secretary John Kerry.