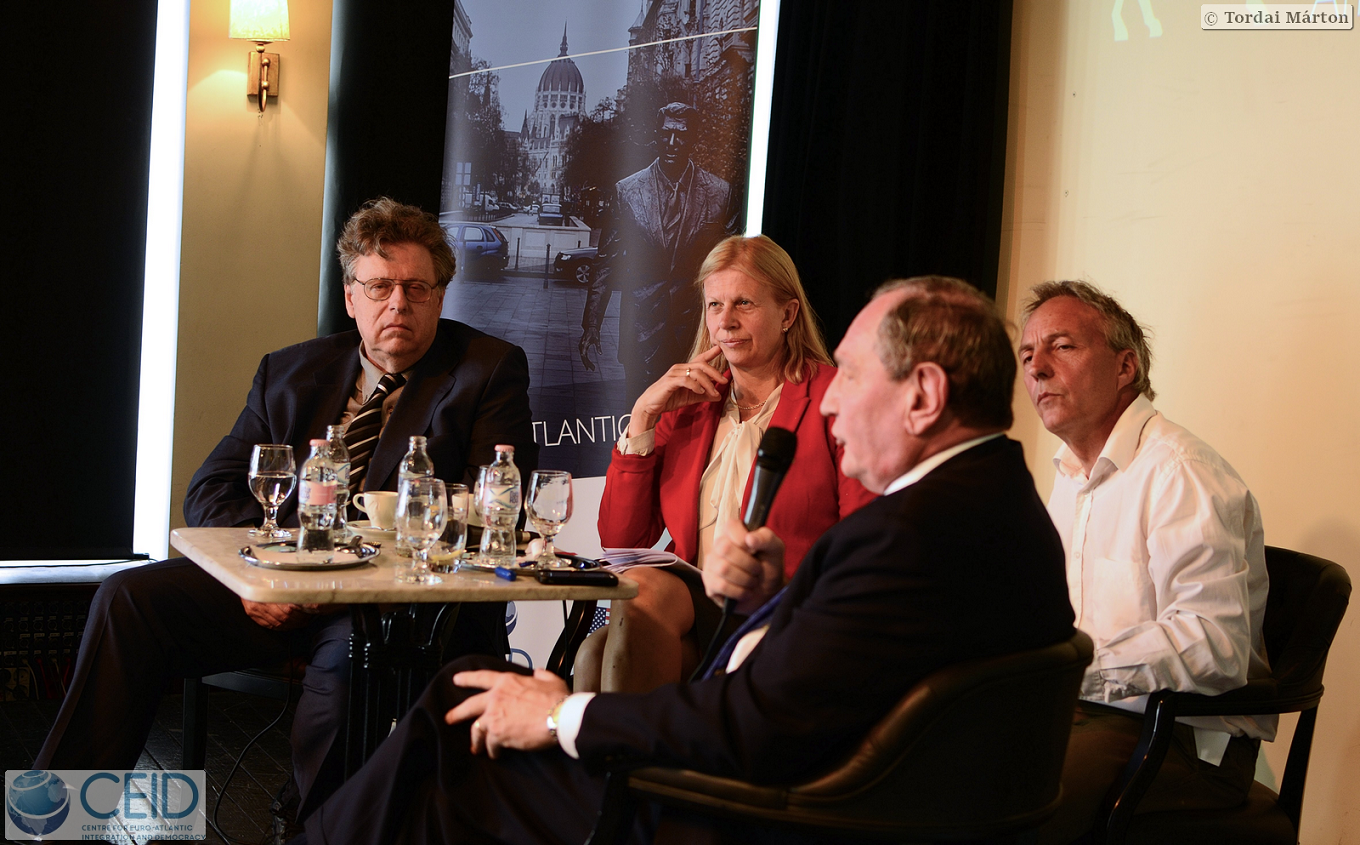 Posted at 09:49h in NEWS, NEWS LEFT by daniel.bartha
Share

On the 22nd June, 2015 CEID hosted Mr.George Friedman, founder of Stratfor , Ms.Janne Haaland Matláry, Professor of the Oslo University and former State Secretary of the Ministry of Foreign Affairs of Norway and our Board Member, Prof. István Gyarmati for a discussion on current geopolitical challanges . Below you can find the summary of the event.

Russia “hostage of a situation it cannot control”

Mr. George Friedman, Chairman and Director of Stratfor, started the discussion by sharply underlining his conviction that the unfolding rivalry between the US and Russia should not be labeled as a new Cold War since “The USSR is gone, and Russia is inherently weak.” In his view, if we are able to see through the intimidating rhetoric applied by president Putin, we will find that the eerie dictator’ position is seriously threatened by a potential economic meltdown due to his country’s overdependence on gas prices. Mr. István Gyarmati, who has a long history of working in the field of security policy, could not agree more with the prediction that the demise of Putin is highly probable in the foreseeable future. According to his  interpretation of the underlying logic behind Russian decisions, Putin was faced with the “Gorbachev-dilemma”, implying that he could either choose to restructure the Russian economy – the failed attempt of which has previously led to the fall of the USSR and that of Gorbachev – or to take the path of centralization and far-right radicalization as he ultimately did. However, it seems that his maneuver will not have salvaged him from the faith he so eagerly tried to avoid. In addition, Mr. Gyarmati and Mr. Friedman further downgraded the gravity of Russian threat by highlighting the numerous failures of the so-feared Russian intelligence service. In a sobering intervention, Ms. Janne Haaland Matláry, professor at the University of Oslo, alerted that the unpredictability of Putin needs to be taken into account when assessing the risk of a potential attack. Mr. Friedman agreed that the development of the current crisis will be defined by the Russians, more precisely by their decision whether to upgrade their military capabilities.

Disunity in Europe- a polarized EU and a divided NATO

Perhaps, few would contest Mr. Friedman’s diagnosis of the EU as being in an existential crisis. He aptly illustrated the root cause of the problem by comparing unemployment rates in Spain and Germany, hinting at the seemingly unbridgeable economic and social abyss between different Member States of the integration. Apparently, one of the many unfortunate consequences of such economic caveat is disunity in foreign policy decision-making affecting EU and NATO equally. Within the Alliance, national preferences differ significantly enough to divide the members into a Northern and Southern club of nations with irreconcilable interests, as Ms. Matláry explained. In her assessment of the current state of NATO, such discrepancy has resulted in the lack of leadership and inability to adequately respond to Russian aggression. As to the American approach towards its European Allies, she sees US indignation with free-riding and insufficient burden-sharing reasonable and urges Europeans to finally take responsibility.

In the context of a bluffing but fairly unpredictable Putin on the one hand, and a crumbling and extremely divided Europe on the other, the American strategy to deal with the geopolitical turmoil caused by the Ukrainian crisis appears to be decisive. Mr. Gyarmati lamented that US Secretary of Defense, Ash Carter’s announced “strong but balanced” approach towards Russia has been brought up this late, instead of being implemented at the time of the last accession process. In contrast, Mr. Friedman was rather skeptical about the viability of this two-pronged approach. Instead of giving too much importance to what he sees as an empty diplomatic gesture, he explained that the intention to halt a potential German or Russian unification process of Europe is a 100 years-old strategy of the US. The recent prepositioning of weapons in Poland and Romania – which Mr. Friedman described as the emergence of a new “entente” – should therefore be interpreted in light of this primordial American strategic interest.

So where does Hungary stand?

While overtly criticizing the official Hungarian rhetoric that led to many misinterpretations and miscommunications regarding the crisis in Ukraine, Mr. Gyarmati insisted that “no single step has been taken that could in any way contribute to weaken NATO’s unity.” Apart from the budget issue of course – he added – which in turn is not confined only to Hungary, but rather constitutes a common European problem. In the analysis of Mr. Friedman, Hungary overestimated Russian capabilities while underestimating US commitment. Although it was undoubtedly a severe mistake with far-reaching consequences, he deemed the decision to be understandable at that point due to the perceived proximity of Russia. Mr. Gyarmati also reminded that there is a certain level of distrust towards relying on the US stemming from historical reasons. Nevertheless, it turned out to be a biased strategy since the US is moving into Eastern Europe, prepared to take action if necessary, meanwhile Putin seems every time less and less menacing. In Mr. Gyarmati’s words: “I care about US troops in Eastern Europe, not the missiles of Putin.”

The event is supported by the Embassy of the United States in Hungary.

Disclaimer: The views and opinions expressed in this summary are those of the speakers and do not necessarily reflect those of the publisher.