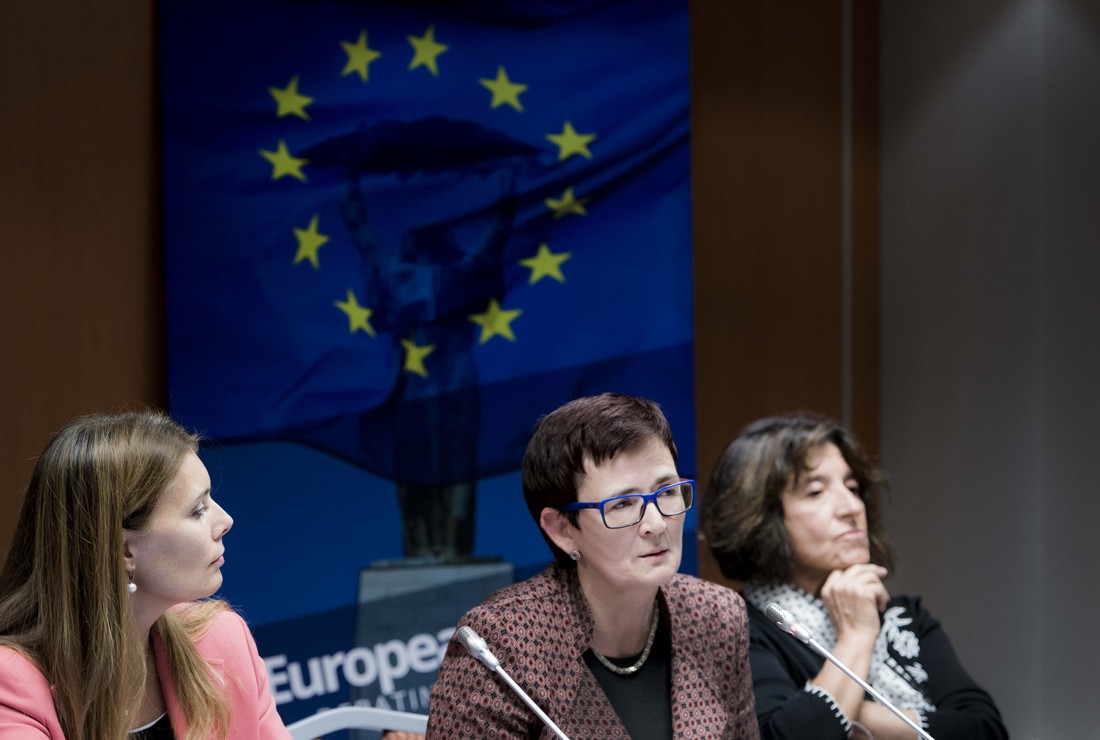 25 okt European Café: Where is the EU heading after the Brexit and the Hungarian quota referendum? (event summary)

Posted at 09:36h in NEWS, NEWS LEFT by admin
Share

The Centre for Euro-Atlatic Integration and Democracy has launched a new series  of discussions on current European issues, supported by Erste Stiftung and the National Cooperation Fund (NEA). We aim to discuss vital challenges of the European integration from a Hungarian perspective. Our purpose is to organize constructive and open debates about our common European future by inviting politicians and experts from and beyond Hungary.

Our first event took place on 20th October 2016, and we were discussing the future of the EU. Our panelists were Birgit Sippel (MEP, Social Democratic Party (SPD) and Júlia Király (Professor, IBS Budapest, former Deputy Governor of the Central Bank of Hungary)

We have had a list of questions, starting with a very ambitious one: Where is the EU heading after Brexit and the Hungarian quota referendum?

Is the EU heading to the right direction? Do citizens think that it’s going to the right direction? Why do we link the two events? As our panelists agreed, both referendums are government-initiated, which makes them seemingly alike. The roots of both could lie in the lack of trust in the EU institutions, but  we have to point out that even fewer citizens trust the national parliaments.

EU bashing has become trendy lately so the main question we are facing is: can the EU regain the trust of the societies? After Brexit, how will the EU’s future structure look like? Is it going to be an á la carte EU?

Ms. Sippel called our attention to who is usually organizing these referenda? Who initiates it? Who has money and power for it? Both referenda was launched by governments and these votes had little to do with the EU.  ‘The EU was a hostage of different interests. Pure lies have been told, emotions were raised.’ We agreed that referenda are not always the best instruments since they are not always democratic. Their biggest disadvantage is that the cohesion of society suffers.

The EU had to take a difficult decision whether to get involved in the campaigns. According to Ms. Sippel there was no appropriate reaction found. But there was heated debate if interacting helps or just fuels the debate. Just to make things worse, some national politicians are responsible for the shrinking trust in EU institutions, as they – after taking part in the making the decisions in the Commisison’s level – communicate it in a completely different way at home.

And when it comes to the Brexit, as Ms Sippel mentioned, keeping the UK in the EU, is not our decision. The referendum’s results are clear. But it’s important to see, no one was prepared for a result like this. Not even those who were campaigning to leave. ‘Look around! They are all gone now’.- as Ms Sippel pointed out.

Ms Júlia Király explained the audience the EU’s future from an economic point of view. Concerning the topic of a possible Hungarian exit, Ms. Király replied “no HUNexit until the European funds arrive”. Hungary has no chance for a successful future without Brussels, but we should also see that we are part of this political project. And the panelists’ reflection about the Hungarian referendum was that it had served to stir up emotions. They also agreed upon the fact, that the Hungarian referendum was absolutely senseless – in contrast to the British one, which had a clear (even if uexpected) outcome.

The speakers’ conclusion was that there is a strong neeed for a more effective communication strategy and a real improvement in delivering information about EU institutions, and between governments and citizens. They both believe that the EU is still efficient and by standing together the community can still progress.