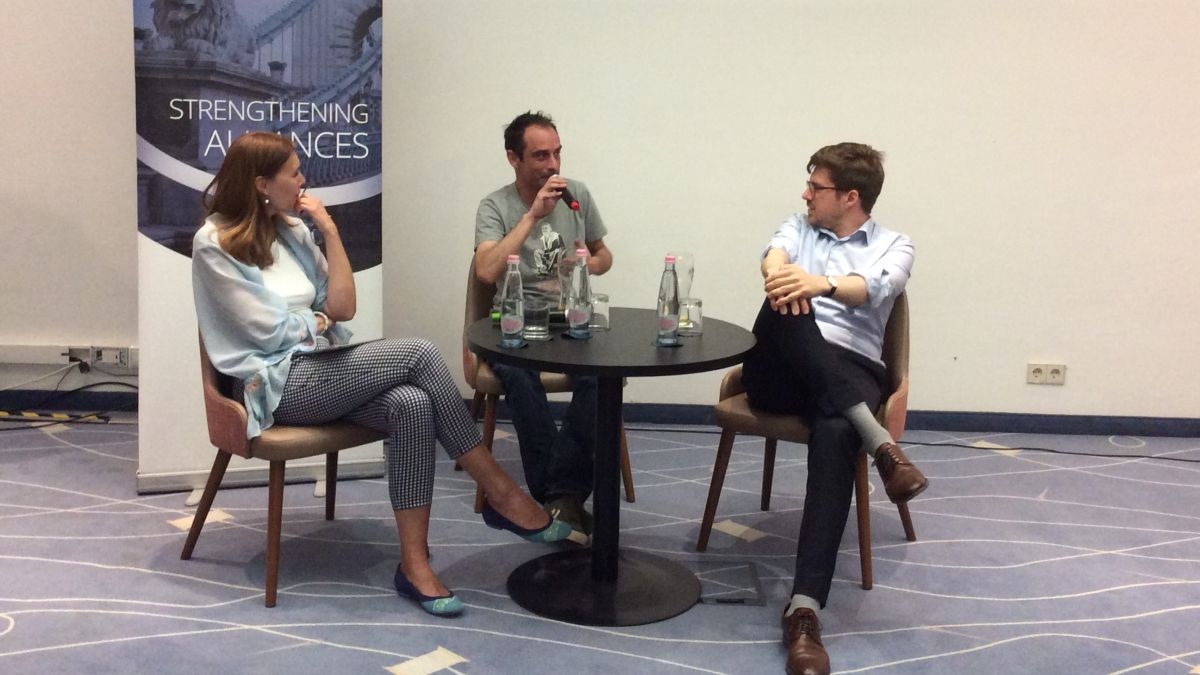 With the EP elections just around the corner, it is of utmost importance to take Europe very seriously.. at least for the politicians. CEID instead organized a panel discussion as

With the EP elections just around the corner, it is of utmost importance to take Europe very seriously.. at least for the politicians. CEID instead organized a panel discussion as its next event within the frameworks of the European Café series, hosting representatives of the two of the most successful joke parties of the EU. Mr Dustin Hoffmann represented Die Partei, the only European joke party to have an MEP through Mr Martin Sonneborn from Germany, while Mr Gergely Kovács, founder and chairman of the Hungarian Two-tailed Party (MKKP) talked about their similar aspirations. Ms Edit Inotai, senior fellow of CEID moderated the event. The topics of the unofficial inaugural European Joke Parties Summit included the legitimacy of the existence of joke parties in the current political climate, the two parties’ programs for the upcoming election, and even a historic agreement was reached between the two panelists.

According to Mr Kovács, in a world where Donald Trump and Volodimir Zelenski were elected presidents in the USA and Ukraine, joke parties have all the right to operate and bring a new approach that shakes the status quo (and sometimes are less of a joke than traditional parties). Though polled at only 2-3% respectively, they offer a perspective that would not be viable if there weren’t any need for them. As Mr Hoffmann answered to a question from the audience, their voters are mostly the urban younger generation, who are satisfied with what they’ve been doing, therefore Die Partei’s program is simple: “we will continue”, which is actually a quote from Hungarian PM Viktor Orbán from the 2014 campaign. Mr Kovács couldn’t even prepare from the lengthy manifesto he had just printed out prior to the event, but the gist of it is getting a record 127% result at the elections, which means 24 out the 21 EP seats allocated to Hungary by extending the welfare system of free beer and eternal life to all European citizens, making Hungarian the only official language of the EU, and the idea of celebrating every country’s national holiday in every state of the integration, which would fully strengthen the European identity. As for life in the Parliament, Mr Hoffmann expressed his party’s delight that should the MKKP jump the 5% treshold, Mr Sonnenborn (Die Partie’s MEP) finally wouldn’t have to sit alone in the very interesting and sometimes awkward group of independents. MKKP’s chairman said that their famous Chicken Man would be the most suitable Spitzenkandidaat, as nobody could really understand him. This they would be able to do as a result of a historic agreement that established the ‘Serious (Sirius?) Party’, the European Parliament group of the – currently – two joke parties.

CEID broadcast a live video of the whole event, which you can access on our Facebook page.